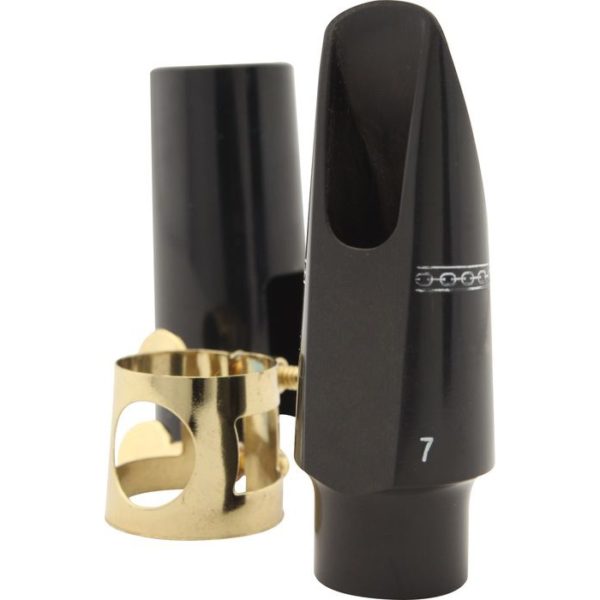 The first mouthpiece Otto Link made in the early 1930s, probably 1931, was the MASTER LINK. It had cut out ridges beside/under the table, allowing the ligature to slide on. , Later models replaced the slide on ligature came with the same band ligature as the FOUR**** MODELS. These mouthpieces have a very low baffle, a huge chamber and typically a very small tip opening (usually a 3 or 4) with a long, deep facing. Hence, they had a very warm, dark, sound.

In 1938 the first hard rubber mouthpiece by Otto Link started production. They were a budget line for Otto Link, like a student model. This is because back then hard rubber was so much less expensive than brass. They had the largest chamber in the history of rubber Otto Links, and the lowest baffle. Interestingly, they tended to play best with small tip openings. The serial numbers and tip openings were marked on the table. They had Otto Link written at an angle across the back of the mouthpiece with a pretty chain link band going around the front portion of the body. They also sported an attractive machined shank, matching the look of their metal mouthpieces.

Modern Otto Link mouthpieces are made in both metal and rubber, have less material in the floor of the mouthpiece than the more vintage models, producing a darker sound. The tips are a little narrower as well. The first pieces had a very long body, but were converted back to a traditional length after several years.

In the late 1990s, Otto Link made a New York model for tenor. They had a wider width at the tip and a larger chamber.

These metal models have silver under the gold plating and a large tip opening font stamped on the shank. This includes the long body, standard and NY models. The picture below shows a current model metal NY Otto Link on top, with the long body 1980s model under that, and a Florida model, for comparison purposes, at the bottom.