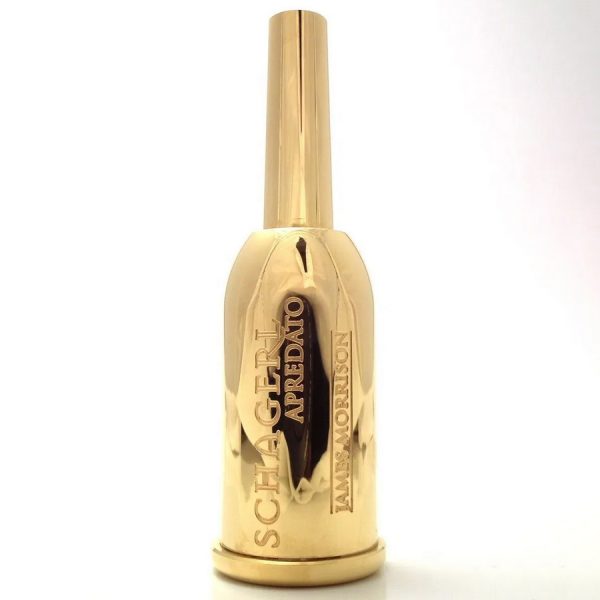 Enquire Now!
Price is a guide only.

The Schagerl Apredato Mouthpiece started with the intention of providing players with a fuller, darker sound and a deep, resonant quality without drastically changing the usual rim and cup shape. Most heavy mouthpieces can be difficult to play, having more resistance than normal. At first glance, the Schagerl Apredato mouthpieces appear to be like most heavy mouthpieces, but Schagerl took a different approach with the Apredato.

The mass of the Apredato is reduced to a minimum, then an attachment is fitted and filled with water. The attachment is coated in waterproof materials to prevent corrosion and sealed with rubber to prevent leaks.

Replacing the water can be done by hand and should be changed at regular intervals.

More than half a century ago, the Schagerl company started as a small music shop with a repair workshop. About 25 years later, the company started to manufacture its own wind instruments. In the meantime, the quality specialists have developed into one of the world’s best-known instrument manufacturers. The company currently employs about 40 people in the tranquil Hörsdorf district of Melk in Lower Austria and is still owner-managed in its second generation. A real family business.

Schagerl’s master instruments deliver a warm, and at the same time bright, sound rich in overtones, delivering a perfect balance in all registers. They are easy to play and are characterized by precise intonation and high-quality workmanship. The instruments of the Master Series are completely handcrafted and have a big community of admirers round the world.

None other than the artists, the godparents, of the Master Series have the instruments of the Signature Series. The result: best intonation, easy response and brilliant sound, players can look forward to instruments with the concepts and details that the greats demand.

The intermediates are completed by the Intercontinental Series, which reflects the facets of the international brass world. In cooperation with renowned musicians worldwide, these instruments were made to imitate the specific sound of a country or a city. Now the world is at your fingertips.

The Schagerl range covers the entire spectrum of rotary valve and Perinet valve trumpets as well as flugelhorns and trombones. Not to mention that Schagerl also produces woodwinds such as saxophones and transverse flutes, which do not have to shy away from international comparison in the least. So everything from the piccolo trumpet to the trombone to the “Wunderhorn”.

The instruments are appreciated and played by the best of the best. Among them are truly spectacular names:

Hungarian Gábor Tarkövi, solo trumpeter of the Berliner Philharmoniker, relies on his master trumpet “Berlin” in Bb and C. As a soloist he plays with numerous other renowned orchestras such as the Chamber Orchestra of the Bavarian Radio, the China Philharmonic Orchestra, the New Japan Philharmonic and the Bach Collegium Munich.

James Morrison, an internationally acclaimed multi-instrumentalist from Australia, is fully equipped with Schaggel, for example with the “Superbone” trombone and the “Raweni” Bb trumpet. Morrison has long been a living legend and has been known to an international audience since his appearance at the opening gala of the Summer Olympics 2000 in Sydney.

Selina Ott feels particularly at home on her two Schagerl models , the “Charis” and “Phoibe”. Already at the age of 11 she convinced a professional audience from all over Europe as a soloist at the gala concert of the European Brass Band Championships in Linz with the Austrian Youth Brass Band. In 2018, at the age of 20, she was the first woman to win the ARD music competition in the trumpet category.