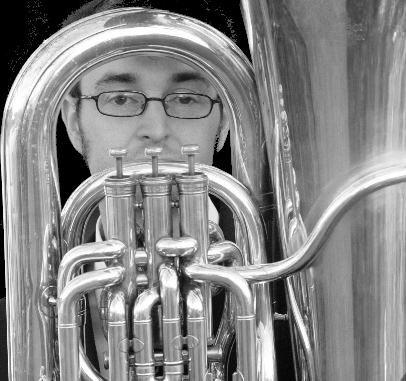 Nick has been playing the tuba since the age of 13 and is a graduate of the Welsh College of Music and Drama, where he studied under Nigel Seaman (BBC National Orchestra of Wales) gaining a BA(Hons) in Music; he then gained his Masters (Commendation) degree at the Birmingham Conservatoire under Alan Sinclair (CBSO) and Richard Sandland (then of Fine Arts).

Whilst at the Welsh College, Nick became the principal tuba of the National Youth Wind Orchestra of Great Britain, a post he held for two years. From 1998 – 2007 Nick was a bass player for the world famous Desford Colliery Band and appeared in numerous contests, concerts and tours for the band.

Nick is a qualified music teacher, something he thoroughly enjoys, and has taught brass and classroom music in a variety of different settings. In August 2006, Nick travelled to New Zealand to teach music and create and direct the Nelson Brass Academy. The Nelson Brass Academy now has a New Zealand wide reputation and in 2010 the Nelson Vivace Youth Brass Band were crowned New Zealand Youth Band Champions. In 2011, the Academy were awarded a SOUNZ community commission written by John Rimmer.

In 2007 Nick was selected for the National Brass Band of New Zealand, also playing for the band in 2008. Nick also travels the length and breadth of New Zealand to play with a variety of different ensembles. Nick also performs for the Tasman Brass Ensemble, an exciting brass group based in the Nelson Bays, they recorded their first CD ‘On the Rocks’ in 2009.

In 2009 Nick was appointed the joint Musical Director of the 2010-2011 National Secondary Schools Brass Band of New Zealand.

Music Services is the only instrument servicing group that makes me feel as if I have a brand new tuba everytime I get it back! – Nick Sharpe